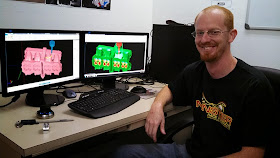 The mission of Monster Race Products, a motorsports startup company out of Wichita, KS, is to use advanced manufacturing processes to help racers, engine builders, and OEMs fulfill their visions of improved racing performance. It broke into this market in 2013 by introducing a radically different 4-cylinder motorcycle billet head design that will allow builders and porters to move beyond the horsepower limitations of current racing engines.

Mastercam’s Dynamic Motion technology allowed the company’s 5-axis machine to create a deeply sculptured head at high speed using a long tool without having to worry about interference or chatter. Owner Mitch Brown said, “Mastercam gives us the flexibility to integrate our manufacturing processes with advanced technology borrowed from the aerospace industry as our sales growth permits.” 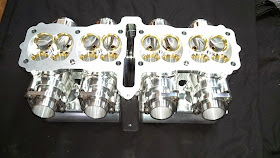 The new billet head starts out as a solid 100 lb. block of aluminum. It is highly sculpted to leave only enough material to preserve the head’s structural integrity while reducing its weight to a mere 20 lbs. The prototype head generated 305 hp. The first production Pro Stock version made power equal to the best thus far by the OEM and third party cast heads that have been on the market for two or three decades.

Word travels fast and far in the motor-sports world—most of it via the Internet on Facebook. Photos of the new head design and posts about dyno results have attracted attention around the world. Within months of releasing the new head product, Monster Racing had delivered 20 heads to engine builders, racers, and racing teams in England, Hungary, New Zealand, Australia, as well as the United States.